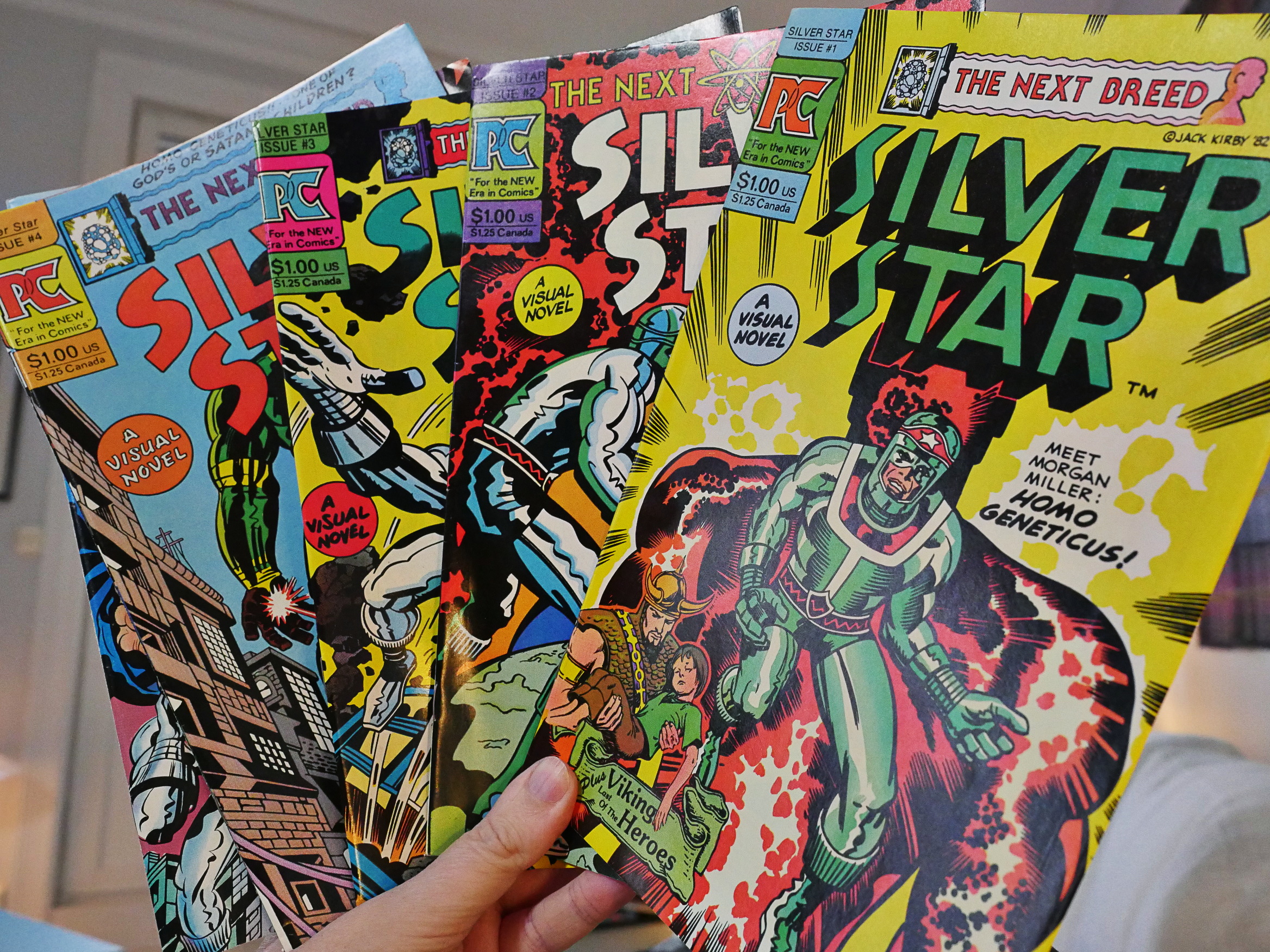 Pacific launched their line with Captain Victory by Jack Kirby, but it wasn’t well-received, and apparently after a strong launch (with 135K in sales) the series tanked after a while.

So Kirby launched Silver Star, which (if I remember correctly) was something he’d had on the back-burner for quite a while. It was conceived as “a visual novel” and Pacific published it as a six-issue series. Each issue has 20 pages of Kirby and then a back-up feature that varies. And this is very much late-stage Kirby.

“Happiness and Holocaust forever surprise us! They generate and grow and prepare to penetrate our lives from the very spot we never watch! The baseball fan calls it ‘left field’ — but in this case — Let’s call him: Silver Star, Homo-Geneticus.”

That’s one way of launching a comic book.

But this is nothing compared to the following pages. Excuse me for excerpting at length, but it’s just too too: Then it calms down a bit and becomes a more “standard” Kirby super-human narrative. Basically the schtick is that a guy has fiddled with the genetics of a bunch of kids, and they’ve become super-heroes. Yes, not that original, as Kirby had done variations on the people-not-knowing-they-were-super-heroes before, but this is weirder than all the previous iterations: I mean, look at that panel. Just look at it. In what dimension does that even makes sense? That’s the villain, and once again Kirby is doing a variation on Darkseid design-wise.

Unfortunately, as promisingly weird Silver Sur^H^Htar starts off, we soon get bogged down in pretty standard super-hero standoffs between the good guys and this guy. Still, it’s more inspired than Captain Victory. The back-ups are a very mixed bag. This little ditty by Michael Thibodeaux (who did the inking on most of the Captain Victory issues) and Alfredo Alcala is a very standard fantasy thing, and doesn’t have much to recommend it. Heh heh. The villain again. Whatever you might say about this book, it’s obvious that Kirby had some fun while doing it. How many of these super-hero avenger guys does Steve Ditko have? “The Mocker”? He looks like a mess, and then the mess spreads like a fungus onto the evil-doers… And he has a hat. Richard Kyle and D. Bruce Berry do a two-part mystery thing which is almost unreadable. One reader is very much taken by the ramblings of the villain. Oops! One kinda interesting thing about both Captain Victory and this series is that Kirby has significant black characters, which was still something a rarity in mainstream comics at the time. Kirby has fun with his layouts, shifting from huge two-page tableaux to these pages with tiny panels. I can’t really say that the ending is very satisfactory. Silver Star tricks the villain into destroying himself in the least convincing manner ever. The back-up feature seems to imply that there are more issues to come, and the sixth issue doesn’t explicitly say that the series is over, but I thought it was planned as a six-issue series, so it’s kinda weird.

Hm… Yup. The ad says that this is the conclusion of the series.

The concept for Silver Star began in the mid-1970s as a movie screenplay by Jack Kirby and Steve Sherman. The final comic series was based on the initial screenplay, with some revision made by Kirby.

I can’t find any contemporaneous reviews, but here’s a new one:

Is it any good? Not really. The drawings are crude and the script is done in the Jack Kirby style, which has a certain je ne sais quoi but will be a jolt for those unfamiliar with it.

Last but not least, there’s Jack’s writing. As a writer, Kirby’s a great artist. While the plot is not bad, there’s all sorts of ham-handed and clunky interplay, with a lot of over-the-top comic book stuff that probably seemed a bit cliched then, and really looks bad now.